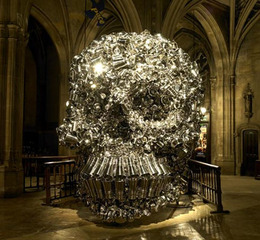 Born and raised in Khagaul, India, Subodh Gupta is a highly accomplished and connected artist. Working in New Deli the 48 year old has drawn inspiration from India and the everyday lives of its people. Gupta’s practice shifts between different mediums including painting, photography, video and performance, but he is best known for his vanitas inspired sculptures. The Vanitas Movement began in the 16th century and has continued to influence artists ever since. Vanitas; which is latin for vanity, is a genre of still life painting. A vanitas painting contains collections of objects symbolic of the inevitability of death and the transience and vanity of earthly achievements and pleasures; forces the audience to consider the brevity of life and their own mortality.Two such sculptures are "Line of Control" and "Very Hungry God."

Like Song Dong, Gupta uses everyday objects in his artworks, leading them to be considered high concept/ low material. Predominantly metallic, the objects vary from kitchen utensils to typical Indian transports; including bicycles, scooters and taxis. His culture is clearly visible in his works; all the objects he uses are common place in Indian households, relatively inexpensive and likely symbolic. Gupta transforms the icons of Indian everyday life into artworks that are readable globally. He is among a generation of young Indian artists whose commentary tells of a country on the move, strengthened by economic growth and a more materialistic and capitalist mindset. As Gupta says: "All these things were part of the way I grew up. They are used in the rituals and ceremonies that were part of my childhood. Indians either remember them from their youth, or they want to remember them." Gupta's strategy of appropriating everyday objects and turning them into artworks that acknowledge but build upon their former meaning/function connects his practice to contemporary artists such as Hirst, Swallow and Shaomin. He was even described as  "the Damien Hirst of Delhi." by The Guardian.

As seen above in "Very Hungry God" his use of metallic objects has given the 3 dimensional skull an air of luxury due to the highly reflective surfaces, whereas the artwork is in fact built from inexpensive stainless steel utensils. This artwork has a dark symbolic meaning and is a comment on the current change and abandonment of India's culture due to globalization. Skulls are a universally recognized symbol of death [a symbol which was regularly used during the Vanitas], the Indian utensils are symbolic of India's everyday and cultural past [much like the still life objects used in the Vanitas tradition], and finally the combination of these two ideas represents the death of India's past. This artwork does have a lighter meaning though; India's past was wrought with hardship and suffering for many of its people, and the symbolic representation of the death and end of the past can be taken as a decision to create a new and free India. This recreation of the roles of common place/everyday items has characterized his sculptural and installation practice, however it is also very prevalent in artworks of other mediums. Painting is another important part of Subodh Gupta's art practice. His series 'Still Steal Steel' consists of photo realistic paintings of kitchen utensils moving within abstract forms. In his early paintings. Gupta used another element of Indian every day life, cow dung. This is used in India for building houses and as fuel for cooking fires. Moreover, the idea that cow dung is literally clean is ingrained in rural India. There, it is a purifying element, both ritual and symbolic. He uses this concept in a photo media artwork "Pure" [2009]. 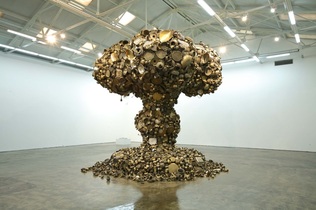 In conclusion Gupta uses scale, material choice and shock very effectively in his artworks. They are always highly symbolic and cover a variety of disiplines; including but not limited to painting, photo media, sculpture and installation. Gupta uses art to comment on the world around him, most commonly the political, social and cultural change which his own country, India is currently confronting. He take influence from the Vanitas tradition in its use of symbols of death within life and the Memento Mori. Overall Gupta has given himself a name as one of the most influential contemporary artists in the world and his artistic practice is most definitely a testament to that.
Powered by