1200 Black Ping Pong Balls and 6 Skulls on a Table

Though at first glance the artworks of Aelbert Jansz van der Schoor and Michael  Murphy show no connections and similarities, they are both part of an ancient art tradition which began in 16th century Europe. Vanitas artists, their artworks contain clear images of death, destruction and mortality. created to reflect the world of their time both artworks have been used as commentary on significant events and ideas 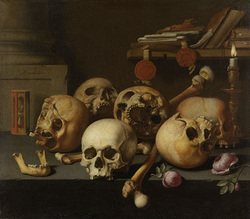 Skulls on a table 1660 is a Vanitas still life painting by Schoor. Painted during the height of the Vanitas tradition it contains one of the most universally understood symbols of death, both then and now. The skull has a number of symbolic meanings; it can symbolize knowledge and age. However it can be assumed that the purpose of its central position in the painting relates to death, due to numerous other references to the dark subject including a hourglass, wilting flowers and other human bones. These symbols are very typical to the Vanitas and are used to convey the messages of mortality and the ideas that material possessions are not really worth anything. They are temporary and once you die you will have no need for them. These material and intellectual possessions are symbolized by the books on the shelf above the table. The artwork uses very interesting perspective and angles. Each skull is in a different position and would be identical and perfect except for the variety in teeth. These remarkably differing angles are a source of interest in the artwork. "Skulls on a Table" is an artwork which also shows a period of realism and a period where oil paint was considered a superior art material. Oil paint is an extremely slow drying paint allowing it to be blended and smoothed extremely effectively. Overall this artwork was created in response to a world which was very used to death, they did not have the medicine nor the knowledge to save people from disease, and the poor were often starving while the Nobel's feasted. These artworks existed to remind the wealthy that for all their material possessions, all are judged equally by God. Religion still being an integral part of the citizens lives in the 16th century, this message of salvation was considered very seriously. Ironically the number of visible skulls adds to six, which in Christianity is the evil number. The artist is reminding the audience that obsession over the material is a temptation from the devil himself, and not to be fooled that these objects are more important than God, or you will suffer in the afterlife. 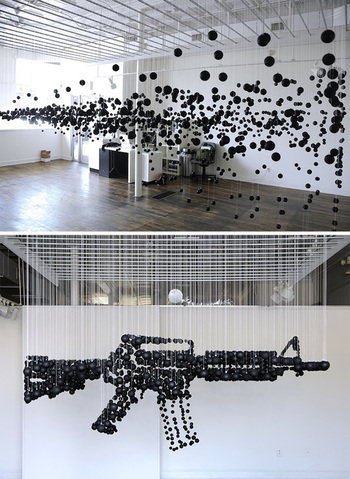 In a clear comparison we see a contemporary installation which was opened to the public on May 7th this year. Its message is unclear until you see it from a very specific angle. "Damage" by Michael Murphy is an animorphic artwork, at a very specific view the formless cloud of black ping pong balls becomes a deadly assault rifle. Created to act as a catalyst for discussion on gun laws and the purpose of guns in the USA it is certainly doing this; already having received coverage throughout Britain, the US and Australia. This painstakingly calculated sculpture is constructed with 1200 ping pong balls which have been painted black. It is not commenting on religion or even directly death, it is a commentary on the place of guns in western society, and by extension the damage and death which can be caused by them. This was clearly brought to light during the recent attacks in schools over the last few years. For example; on December 14, 2012, Adam Lanza, 20, fatally shot twenty children and six adult staff members in a mass murder at Sandy Hook Elementary School in the village of Sandy Hook in Newtown, Connecticut. Before driving to the school, Lanza had shot and killed his mother Nancy at their Newtown home. As first responders arrived, he committed suicide by shooting himself in the head. Though extremely confronting Murphy has decided that we need more discussion on gun laws in the US as we are no closer to a solution than we were 10 years ago. The artwork itself is symbolically made up of many different parts, each symbolising gun attacks where people have lost their lives. Only together do they make up the alarming picture of a gun that we often associate with war and death. Unintentionally this artwork also seems to comment of the place of war and peace; particularly the wars America has been and is actively involved in. Innocent civillians has lost their lives in the crossfire, yet no-one seems to care about these far off foreigners, they could have been dangerous, could have been terroists; especially if they are from the middle east. These ideas of death are the points which make this artwork a memento mori and a Vanitas sculpture. Overall it comments on the place of guns in society and shows individuals and groups affected by the violence, but only when viewed at a cetain angle can you see the bigger picture that they have come to represent.

In conclusion "Damage" and "Skulls on a Table" are artworks, which while separated by centuries, can be linked by common influences and themes. At first glance there is no connection, but when looking further into the contexts of and symbolism in the pieces, conclusions can be drawn and opinions can be formed. For these artworks, death is only the beginning.
Powered by