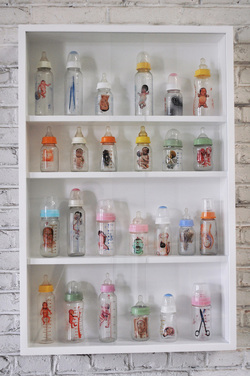 Bottles, rubbish and junk from one of the worlds'd fastest growing cities accumulates outside an artist's studio. The site has become an unregistered recycling plant, taking glass, plastic and any other bottle in between and transforming it into what some describe as art. However when you acclimatise to the smell you are able to see past the illusion of trash and see these materials as the artist does; an opportunity for beauty, for questioning the world in which we live. Liu Zhuoquan, born and raised during the Cultural Revolution came to understand the value of trash. Mao's Great Leap Forward starved approximately 40 million people, a stark contrast to today's society overflowing with waste and materialistic values. During this time traditional art, literature, music and dance were banned, library's were pillaged and artworks were burned and smashed by the red guard. As well as contra banding the arts and forms of self expression, the people of China had no freedom to comment on the lives they were living and the Regime headed by Chairman Mao would swiftly silence any who dared to question them. One such art practice was inside bottle painting or 'neihua' where delicate designs were painted onto the insides of snuff boxes. This tradition has now been recreated as a social, cultural and political commentary, painting onto the insides of glass bottles images and symbols of modern day China. Three such series of artworks are 'Seven Sparrows' [2011], 'Broken Finger' [2010] and 'Milk Bottles and Babies' [2010]. Another artist who finds inspiration from the Cultural Revolution is Song Dong, another Chinese contemporary artist who uses found objects to comment on Poverty and his parents personal experience during Mao's Great Leap Forward. 'Waste Not' is an artwork of Song's which draws interesting parallels to the work of Liu Zhuoquan.

Delicate and precise, Liu's art cuts through the social and political barriers of modern day China to question some of the most 'taboo' topics in the country. Babies' Bottles are lined up on shelves and pastel coloured lids recreate the innocence of childish colour and life. Embryonic forms decorate the insides of many of the bottles, standing alongside those painted with scissors, scalpels and other scientific imagery. 'Milk bottles and Babies' is a series of babies bottles painted with embryos, babies and other symbols of birth and abortion. It is a commentary on the One Child Policy, a highly controversial law which decrees each family can only have a single child. Recently further controversy has erupted over forced abortions due to the mother already having a child. Observing such exhibition, it is difficult to fully understand how the artist is able to symbolically challenge a viewer to analyse their own morals and opinions on a topic which targets the ethics of family, love and life. 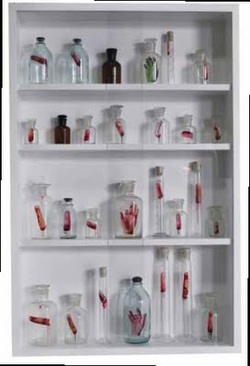 Another artwork which take its inspiration from family is Seven Sparrows; a biographical work focused on the life of the artist's father. The 'Up to the Mountains and Down to the Countryside Movement'  was a policy instituted in the People's Republic of China in the late 1960s and early 1970s, as a result of the anti-capitalist thinking prevalent during the Cultural Revolution, Mao Zedong [Chairman Mao] declared certain privileged urban youth would be sent to mountainous areas or farming villages in order to learn from the workers and farmers there. A member of China's 'Lost Generation', Liu's father was sent to the countryside and due to his lack of experience as a farmer, he was given the task of chasing sparrows away from the crops with a stick. This deeply embarrassing task resulted in the deaths of the sparrows, disrupting the eco-system and allowing the crops to be eaten by insects. This lead to widespread and severe famine which caused the deaths of many thousands and weakened the nation. In this installation, replica Chinese street lamps, similar to those in Tianammen Square, are carefully and painstakingly painted with dead sparrows. The similarity between the lights and those around Tianammen square is also symbolic due to the square's central position as the location of major Communist buildings and historical events; including the 1976 protests. Comparing this work to Song Dong's "Waste Not" we see a direct connection in the terms of family and the impact of the Cultural Revolution. His father was also sent away from the family when Song Dong was a young boy, and it was many year before they were reunited. He speaks of how when his father finally returned he ran away scared, because he did not remember him. Another installation, "Waste Not" shows the multitude of goods Song's mother hoarded during the Cultural Revolution and afterwards. Among the many object there are shoes, boxes, bowls and the skeleton of a traditional shack/ house. Most interesting perhaps though is the collection of soap, which was accumulated during the Cultural Revolution, when all goods were distributed by coupons and there was often a shortage. His mother collected these pieces of soap so that when Song and his siblings married, they would never have a shortage. Of course the Revolution ended and the soap was never needed, but now it has become a social commentary within the wider work of the connections of family and the difficulties faced by families during the reign of Chairman Mao.

The final body of work is "Broken Finger" [2010]. This installation, like many of Liu Zhuoquan's work is very controversial and political, but perhaps maybe even more so in this case. It has been perceived by many to be a near direct attack on the Chinese government and companies for unethical practice and working conditions, which are some of the poorest world wide. Working in factories in china is an extremely dangerous profession, one which claims multiple lives each year and often results in lost limbs and other serious injuries. Furthermore little compensation is provided and in many companies the workers cannot afford the medical attention needed, leading to infections and further damages to health. The series itself is as usual a large collection of glass bottle, but inside we see gory and precise paintings of severed fingers, hands with missing fingers, and infected limbs. An overall horrifying, shocking and deeply emotional installation, it calls for change and not only change, but drastic improvement. Perhaps these challenges to the Chinese authorities have been the cause of the many bans on Liu's artworks being taken out of the country.

Clearly seen through the work of artists including Liu Zhuoquan and Song Dong, China has become the new centre of the contemporary art world and is continuing to produce incredibly thought provoking art and commentary. However the rise of this new art world has not been without its hardships, and the Communist rule was certainly a major one. These days artists in China are using their work as a social, political and cultural commentary of the world around them and this becomes obvious in the works by Liu Zhuoquan, 'Broken finger', 'Seven Sparrows', 'Milk Bottles and Babies', and the work by Song Dong; 'Waste Not'. In the use of both traditional and unconventional art making practices the artists show the links between family, culture, society and politics in a new and exciting age for contemporary art.
Powered by