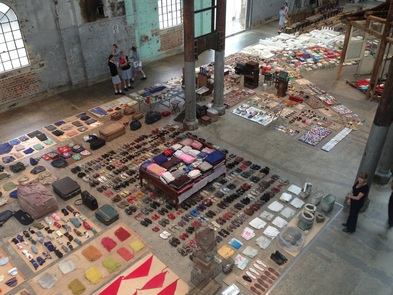 The collections of Zhao Xiangyuan, the mother of Song Dong and his collaborative partner in developing “Waste Not”, include; mounds of toys, Styrofoam blocks, bowls, rows of old shoes, plastic bags, birdcages and stacks of blankets. All of which is arranged in careful precision on the floor of Sydney’s Carriage Works. The materials constituting Song Dong’s critically acclaimed artwork “Waste not” are not exactly your typical art materials. But is it an artwork? Previously housed in some of the most highly prized locations around the world; including MoMa in New York and London’s Barbican Centre, this controversial installation has puzzled, moved and inspired audiences on an international scale.

Over 10000 items were assembled in Carriage Works over a two-week period. “Waste not” has not been made, so much as arranged. This use of taxonomy has created ordered patterns which when viewed from above, form a mosaic of colour. In its use of personal, non-art materials, the artwork has become a portrait of a family and a mother instead of a collection of seemingly random junk. The use of the ‘everyday’ makes this artwork relevant to all audiences, and reflects an image of our own lives, no matter our upbringing and lifestyle. In the centre of the artwork is a small skeleton of a house; very similar to that of the house Song grew up in. This is the centerpiece of the entire installation and it is essential to the overall artwork. Aaron Seeto; the curator of the artwork at Carriage Works talked of how this is a very different way of displaying the artwork; having usually been displayed in art galleries and museums with “White walls and Ceilings”. He says “Carriage Works is a space very similar in age to that of the house; about 120 years old”. This allows the audiences to draw comparisons between the architecture. It seems like the house could have always existed in the middle of the entrance room. “Waste Not” is a transitory and ephemeral artwork as it consists of highly personal items, all of which hold specific meanings and memories for Song Dong and his family. This artwork is going to continue moving after its stay in Sydney is complete and it can never be sold as it is a memorial of sorts to Song’s mother and father 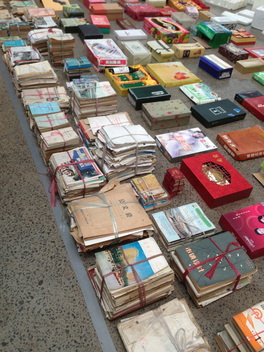 The concept of creating “Waste Not” came to Song after his father past away in 2002, as a way to help his mother cope with her grief. Zhao had been hoarding objects for 50 years due to periods of poverty and hardship. The most influential of these periods, was the Cultural Revolution, which began in 1966; the year Song was born. Lasting for 10 year it represented Mao’s last attempt to gain the mass support of the people of China, needless to say this failed dismally and led to widespread conflict and poverty. However it was during periods like this that Zhao collected the 10000 items seen in the installation. She had no idea when she would need them and during the Cultural Revolution, if you wasted anything your odds of survival dropped dramatically. Song involved his mother in the artwork by having her help find and catalogue all the objects and soon she became a part of the artwork itself, sitting telling all the viewers stories of the objects and memories of Song’s childhood. Song Dong’s conceptual practice features the idea of High concept, low materials and explores the ideas of “Transience and Impermanence” in out world. This is seen very clearly in “Waste Not” through the old worn objects and its transitory nature. This is also seen in the neon lights on the high windows outside of Carriage Works. This is a message to his parents who he believes to be in the sky, in heaven. He wants to make sure that they aren’t worrying about the family and friends they left back on Earth. This is also clearly seen in a previous artwork by Song Dong, “Eating the City” where he built an edible city out of biscuits, which was eaten after it was exhibited.

Over all I believe that this installation represents both the people of today and the people of yesterday. It is a portrait of history and a family and it is, in its own way, beautiful. This is not a pile of random junk and trash, the meanings and memories have converted it into metaphorical treasure and the overall experience into an artwork like no other. For those who have not yet seen “Waste Not” I cannot recommend it more highly. It is in my opinion, definitely Art.
Powered by